You are here: Home / Archives for Havilah House

I intend to maintain, repair or create something every day for the year of 2023. Earlier this morning I checked my oil and water, and noticed that the seat belt latches get in the way for opening and closeing the engine cover, so I loosedn the bolt and adjusted the latches so the engine cover no longer scrapes past the latches when I inspect the engine. 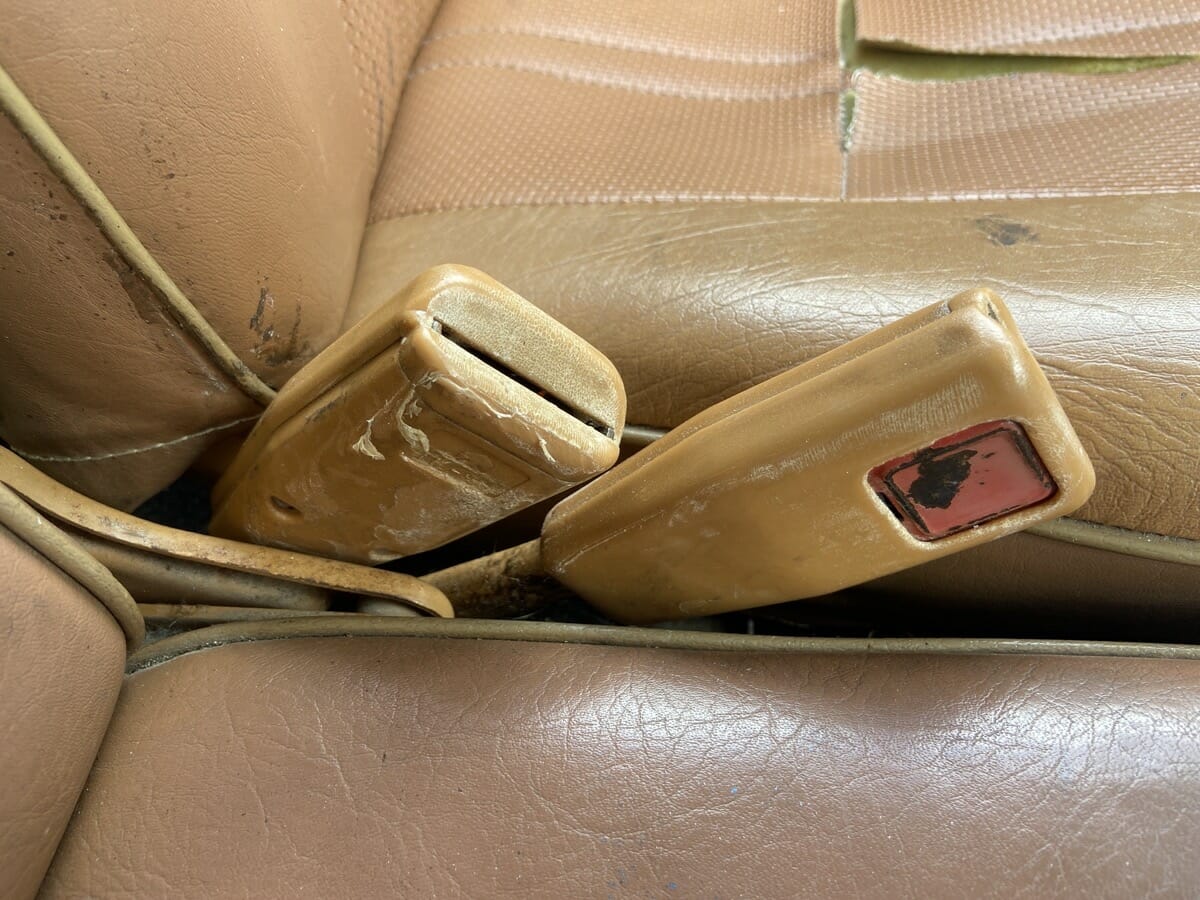 I also tested the plastic Toyota dipstick in the Nissan which makes it easier to see the oil level, it worked well so now I need to find a plastic dispstick.

Been busy with the Outside Bathroom and adding the finishing touches,

The plumbing was something of a headache, should I use copper or pex? Should I use gas for heating or run a line from the home hot woter tank. Where will I place the bath, what about a toilet? should it have a WC, and if I add a WC should us gravity and water to flush or should I use on of those crap crushing toilets with a built in pump. What about my wash hand basic should I use the nice one I found on the side of the road in perfect condition or should I use a smaller one?

Secret Sauce: Just make a decent start and keep going, that the best way and sure enough I’ve reached the point it’s useful.

Thoughts about Camping and Glamping

I’ve been working steadily towards offering bits of our home / garden to Travellers, Campers Glampers etc.

My engine starts very easily and runs very smoothly and has plenty of power! So what’s the problem?

The problem it that after it starts and after I rev or drive it for a short time the idle speed goes up and runs way too fast, probably about 2000 RPM.

I went to a car show in my town a while ago and asked a chap there who had an older car where I could find a good engine tuner, someone to work on my carb, he referred me to Russel in Caloundra, so I went to see him but he refused to work on my 40 year old car because it was not old enough, and because he was busy, and he like working on the older classic cars.

He was friendly and we chatted for a while and I described my problem with the high idle. Russell suggested the flap was sticking open and that I might try a bit of INOX Lanoline Oil to loosen it up.

I pressed him for more information and I asked if he used some “Special Engine Sauce” to clean out his Carburettors, he showed and he showed me a can of ThreeBond Engine Cleaner and warned me that although it loosens and cleans, it leaves behind a residue which will harden if left, so I will need to flush flush all the residue away before it hardens again.

I washed out the Carb with the “Special Sauce” and then liberally washed the inside of the carb with petrol and a paint brush and now it is sparkling clean inside. Prior to cleaning my carb was black inside and now it is silver !

This has fixed the high idle speed, I suspect it was a sticky flap, and my guess it that it was probably the second flap which gets stuck open when the van runs fast and uses more power.

The engine idles so smooth and so slowly now that the oil pressure light comes on, so I just need to set the idle a little higher. If I just tap the accelerator very lightly the pressure light goes off immediately

I was wondering if any knows of a book, document or PDF explaining how a carburettor works, and how to properly tune a carburettor?

A friend is scrapping an old E23 and here is a list of bits I’d like to check out. I don’t really need any of these bits but hey who knows, one never knows.

A B Steel Supplies Caboolture ✓

Ron from All About Trailers – Steve Irwin Road

Get Framing Steel From

I have some hardwood laying around and Im thinking through how I’d like to build a hardwood outhouse. In Austalia it’s a dunny, and in South Africa it’s know as a long drop.

I called a good friend of mine, Dennis, the chap who very kindly removed the rust and spayed my van, to find out what I may have possibly damaged when I charged my battery while it was connected to the van.

He said he had 30 minutes he could spar, and drove down to look at the issue. Tracing a wire from the battery to the solenoid lead he was able to tell that the battery received about 11.x volts when I turned the key, it was a tricky operation, because the starter motor is in a challenging location to work on.

The following day (Saturday) was wet and cold and I was reluctant to work under the van, so I was held off for a sunny warm day, but as it happened my good friend Mark called in late Saturday afternoon, he was bored and dropped in to see me.

I had asked if I could borrow his fibre optic scope to follow some cables which run in between from the battery and alternator, The alternator electrics run through the gap between the engine and the inlet manifold, which seems to me to be an odd place to place them.

When I explained the issue I was having with my electrics and he began to diagnose the problem I described. Mark did a great job identifying the issue.

Very soon we had it undone, it was a very tight fit, and I because I was under the van, I took careful to observe how it came out.

After a few checks it’s clearly not working correctly, although we did get the solenoid to tigger once or twice but, neither it nor the motor works properly.

It looks in good condition and may only need a good clean up because it’s covered in oil, but now that it’s out I may as well get it properly serviced.

Cladding a cabin is not as hard as it looks although you probably need at least two people to line is up and get it just right but before you start you really need to insulate your cabin properly.

I choose SilverWrap Medium Duty Reflective Wall Insulation which is what I see many Australian homes wrapped with.

I choos Zincalume Corrugated Cladding for the exterior of the cabin. It’s tried and tested and has been around in Australia for many years.

The Zinc Corrugated Exterior is easy to do once you get started and get a feel for it.

For the interior of the Cabin I have chosen to go with Lightweight Interior Pine which worked wonderfully. I do have some ideas about how I would do it differently next time.

Bracing is a very important part of stringing the cabin, There are two easy ways to do this,

There is aways a lot you can do to straighten your cabin, from the base to the roof top, I learned a lot by doing the bracing and I am glad I did it well, because I can have peace of mind when I move the cabin oneway that it will be able to “travel safely and well”.

Bracing Ply makes it look like a cabin / dwelling very quickly and easy, mind you, its quick to put up the sheets of ply but it takes a long time to nail in all the clout nails. A builder looked in on my cabin an suggested that I probably did not need to put in a many clout nails as I did. Lesson learned for next time.

I have attached the new after market fuel pump. I have a strong suspicion that is much more effect and as a result it is causing a leak in Carburettor.

It started first time after fitting the new pump but unfortunately it is running very rich and after running for while it runs quite badly and idles very slowly. 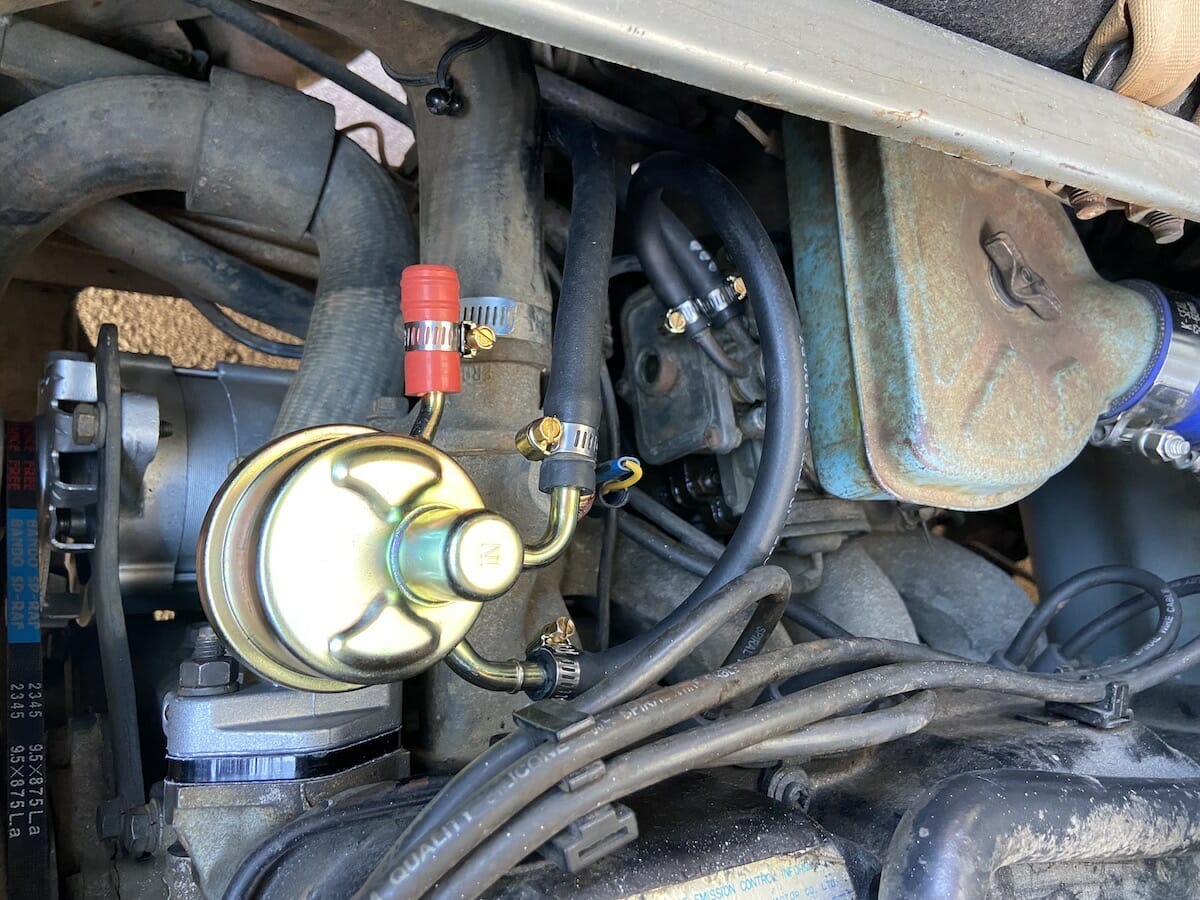 Here you can see that the IN and the RETURN feed on the Carburettor. 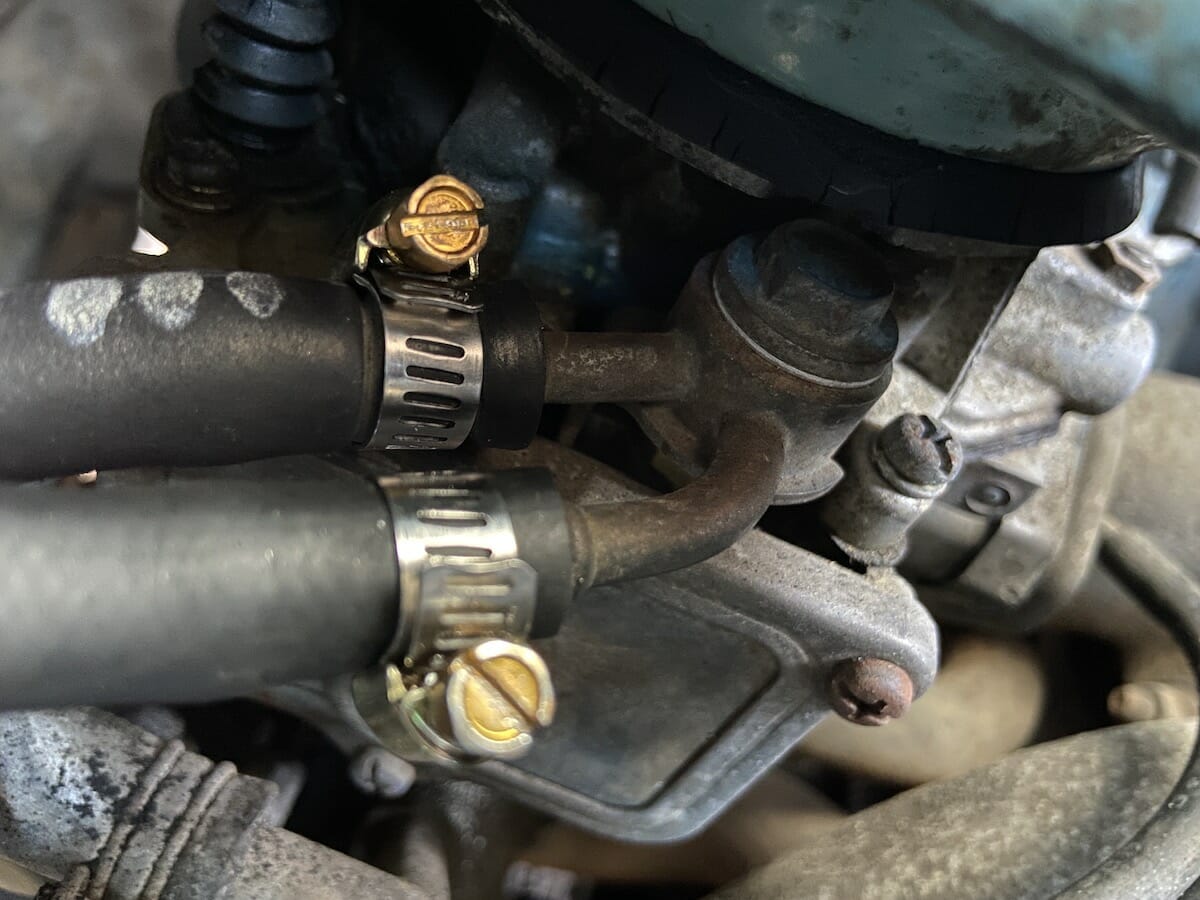 The Leaky Carburettor, probably from two much fuel pressure from the new fuel pump. 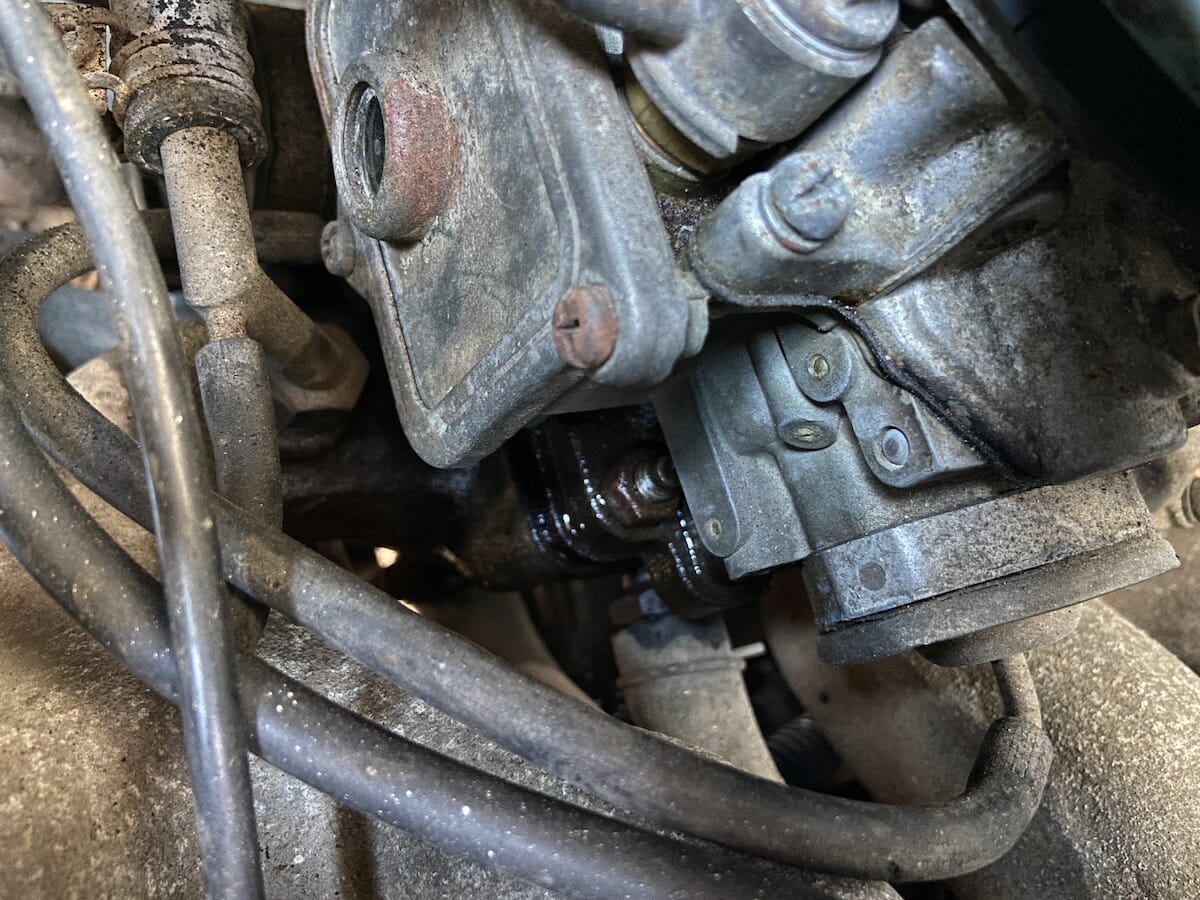 Here you can see the IN and RETURN from the fuel tank into the engine bay. I dont know what the top line is but second and third down is IN and RETURN. 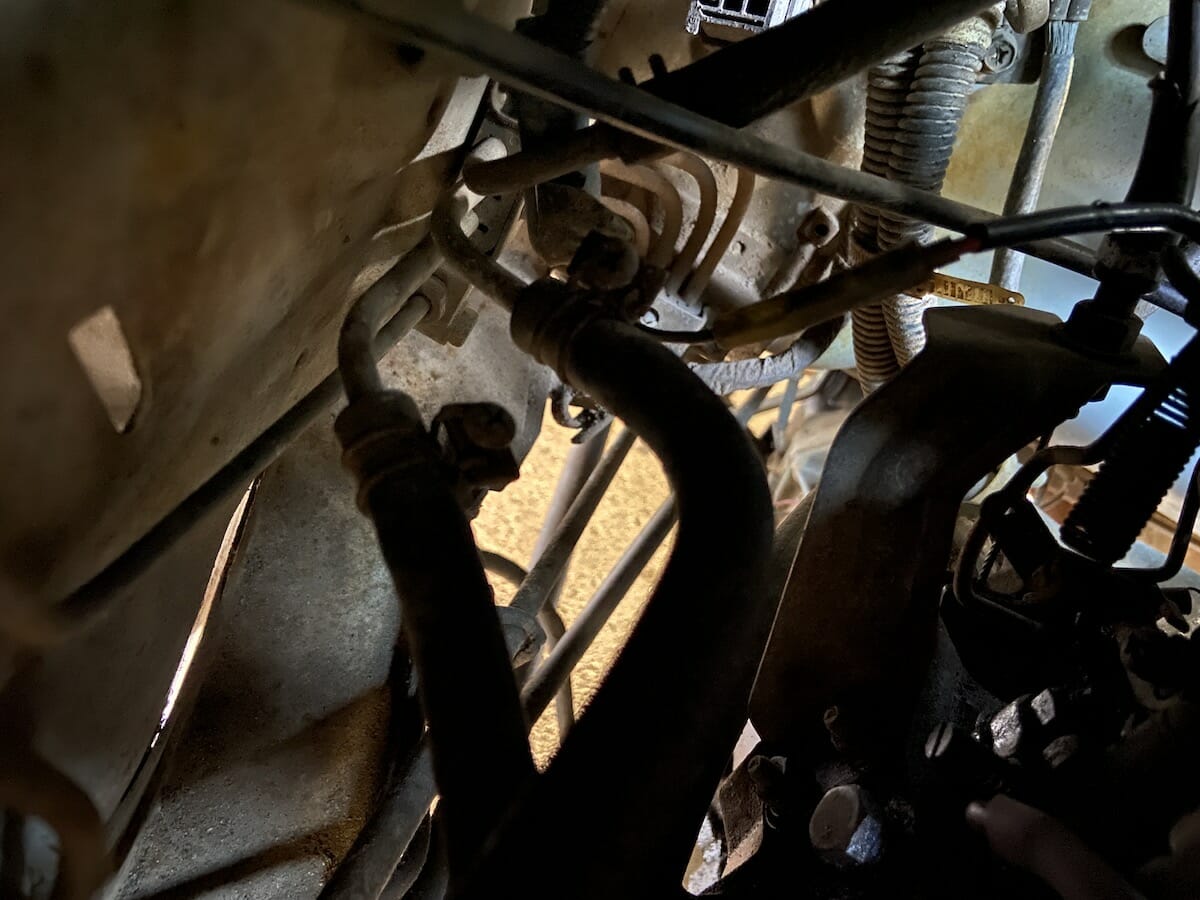